…thanks Yogi Berra for the gift of a headline for this post.

The featured image, captured from Street View, shows one of the UK’s dwindling number of original car dealership operating models – where purchase, service and everyday running are all available under one canopy. Here’s another, and they usually sport a small market town location:

It’s a retail format that worked well for the best part of a century, and one that leaves me with a strange sense of deja vu. Here’s why. 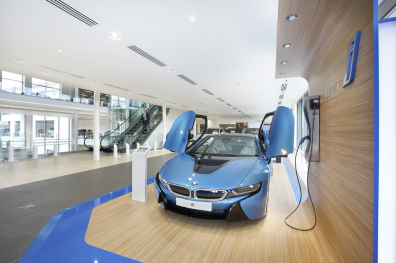 When BMW opened their new flagship site, what was striking was the familiarity of it: a forecourt, canopies, workshops and fuel – but this time in the form of EV charging points for customer’s cars (and I guess, visitors also), as well as those on display inside for domestic fitting.

So here’s the question. Could the growth of EV’s lead us back to a future, where the role of a dealership is toward the entire life-cycle of the car – sale, service and everyday use?

My guess is it’s pretty likely – and important to consider – for at least some dimensions of a network’s representation plan: edge of town, large-scale sites with plenty of parking and plenty of customers living in the new, denser, property developments that occupy the edges of a central urban district.

Oh, and while we’re fueling the conversation, those canopies? They’re all solar-paneled on top, right?