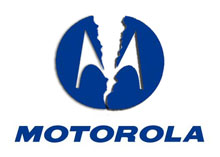 Despite the position at the time the brand was sold to Lenovo (“It’s our treasure,” Lenovo CEO Yang Yuanqing said after the deal. “We plan to not only protect the Motorola brand, but make it stronger.”), the parent company’s ditching the iconic name and identity.

It’s quite a moment. Brands, especially consumer brands, especially when they’re in on the ground floor of something (the company invented the cell phone, after all) tend to stick around, sometimes for a century or more (take Kodak for example). Moto handsets were the iPhones of the Noughties.

I’ve still got a (dead, can’t get the batteries) silver Moto and it still looks great and it was a pretty neat identity.