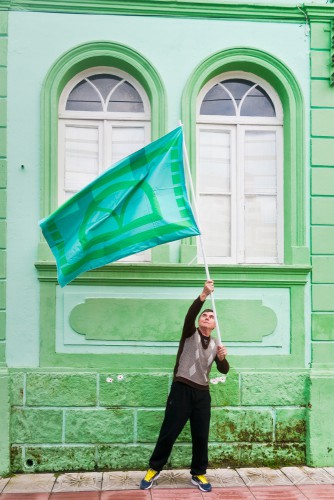 Flying the flag for individuality

Flags are, perhaps, one of graphic design’s most obvious yet most overlooked antecedent. While we still ‘flag things up’ and ‘run up a flag’ metaphorically, we don’t often remember the real power that flags pack. As the ‘standard’ to set yourself by or beside, they can easily be seen as the jingoist’s short-cut to offense and outside of sports-clubs, more often disowned or downplayed.

This project caught my eye, as a way of democratising the iconic design format (media?), a banner based on an individual’s own territory – their home.

“A whole series of flags were designed… using the colours and decorations of typical houses in Florianópolis. Each flag corresponded to a particular house and its identity. The idea was to represent citizens and families – “one man – one vote”.

“The hope was that something as simple as a flag would provide citizens with a voice to express themselves, which is exactly what happened.”

One problem? Flags just for men?